For the past three decades, the Humane Society of Louisiana (HSLA) has lobbied at the state capitol, often drafting and introducing one or more bills each session with the help of sympathetic legislators or fighting against bills we oppose. During the past thirty years, we have been able to pass several of our bills into law, including the following:

– La. R.S. 14: 102. 10 (https://law.justia.com/codes/louisiana/2011/rs/title14/rs14-102-10/), which prohibits bear wrestling matches for entertainment or financial gain. (years ago, at least one bear owner would travel Louisiana with a deranged and declawed brown bear and charge all takers at bars and honky-tonks an admission fee to “fight” the bear. Those in attendance also paid a modest entrance fee.);

– La. R.S. 3: 2366, (https://legis.la.gov/Legis/Law.aspx?d=1016339), which created a volunteer registry for Louisiana public shelters. The Louisiana State Veterinarian, under the auspices of the Louisiana Department of Agriculture, shall maintain the registry and help shelters comply with basic standards of care. For additional information, please visit: http://lacatf.la.gov/programs/shelter-registry/:

– La. R.S. 47: 463.60, (https://law.justia.com/codes/louisiana/2014/code-revisedstatutes/title-47/rs-47-463.60/), which created the Animal Friendly prestige license plate, which is sold through any Louisiana Department of Motor Vehicles and created the Pet Overpopulation Advisory Council. Proceeds from the sale of these plates are deposited into the Pet Overpopulation Fund and the Council distributes the monies to support low-cost spay-neuter programs throughout the state on an annual basis. To date, the Council has distributed more than $100,000 to eligible veterinary clinics and humane organizations;

– La. R.S. 47: 463.45, (https://law.justia.com/codes/louisiana/2016/code-revisedstatutes/title-47/rs-47-463.45), which created the Louisiana Black Bear prestige license plate. Proceeds from the sale of the Black Bear license plate placed in the “black bear account” within the Conservation Fund and is to be used for habitat protection and other nongame programs. 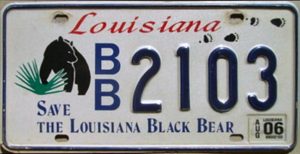 – La. R.S. 14: 102.2 (https://law.justia.com/codes/louisiana/2014/code-revisedstatutes/title-14/rs-14-102.2/) requires an owner or anyone expressing an interest in an animal or animals that have been lawfully seized to post a bond within the first 15 days and each concurrent 30 days equal to the cost of boarding the animal. Failing to post a bond within this prescribed period allows the custodian to take legal custody of the animal(s).